Lady Pac is a maze game for the Commodore 64.

It is a homage to Ms. Pac-Man, an arcade game published by Midway in 1982.

Main differences from the original version:

Your videos are always appreciated. Thank you!

So much fun, you’ve really got a great talent for creating very playable one more go games!

Awesome game! So love playing this! Controls great and love the bonus rounds! Put a little extra in for Bagman to cover this! Just love it!

Thank you for the support! It is very much appreciated!

Reply
The Games of C641 year ago

OUTSTANDING... it's just an immaculate port!  Check out a high quality game play sample, and please subscribe to my YouTube channel if you are so inclined!  Thank you LC Games!

Great remix of the original game, work very well on my The C64. Bravo ^^ !

Thank you so much!

Pretty good - i like the random mazes - nicely done

I've had a report that both your game and mine (Galaga) run at crazy speeds on the Retroarch port of VICE. Have you seen anything like that?  Maybe warp mode is not deactivating after the .prg has finished loading from d64?

Yes, someone reported the same thing to me. And I think it's a warp mode problem too that stays active for some reason. On VICE for PC it works flawlessly. I don't think we can do anything about it. It's a RetroArch problem.

Yeah, although it's disappointing to hear we can't really support dodgy emulators if it works on the real thing!

Hi, having a separate score ranking for each difficulty level in v1.0.4 is great, but unfortunately the in-game high score display is now wrong - it always displays 10k now, regardless of what the actual high score for the current difficulty is. Would be super happy if this was fixed. Again, otherwise fantastic game (my best high score so far: 85k on normal).

Only other hair splitting I can think of is the High Score table.  Is it possible to do them for each difficulty? :P  If there isn't enough room, maybe have it also list on what difficulty level they set as well as the Ghost/Lives amount they set.  Extra stats I know, but this way someone playing on the easiest level doesn't completely crush someone who played on a much harder difficulty.  If so, during the attract mode, they can maybe show each difficulty high score table for about 5 seconds each going through each difficulty.  Maybe even add a colour cycling border all around the High Score table with a * character? :)

Again, just some final input in case you decide to go in again. We are having a blast playing the game otherwise!  Have a good weekend. :)

I have released version 1.0.4 of Lady Pac (I really hope it is the latest). I've implemented pretty much what you asked for. Regarding the iridescent frame around the top scores, even if I wanted to do it, there is now physically no more space.
Have fun!

You are too kind!  Thank you so much!  Off to play some rounds.

This game is so well done, I am really in awe on how much it plays, looks, and sounds like the real thing.  The best thing about this?  The bonus rounds!  This gives a new element to the game, and kind of incorporates the best part of Super Pac-Man!  One suggestion which I think would make this game even more fun...  on the bonus rounds, can you change the points given to the actual points that each fruit gets in the main gameplay?  100 for cherries, 200 for raspberries, 500 for peach, 700 for pretzel, etc etc?  This would inflate the scores yes, but would give a great bonus to the player who can play into the further levels of the game... also, instead of just giving 2000 for having a perfect eat on the bonus levels, why not start at 1000, then go to 2000, 3000, 4000, 5000, etc etc for perfect eats in higher bonus levels?  I really think this would add a great element to your already AWESOME interpretation of Ms. Pac.  If I would have had this in 1988, I would have never left my room... well, I didn't really leave it much anyways... LOL!  Thanks for the great stuff!  I've enjoyed playing the heck out of it... high score so far is 280k+ on normal difficulty, 4 ghosts, 3 lady pacs to start.

First of all, thank you for the compliments. I am really pleased that the game is so popular. About your tip: Imagine reaching the banana bonus round; a banana would be worth 5000 points; multiplied by 18 bananas you would earn 90000 points; add 7000 extra points and you would get almost 100000 points, which would earn you 2 lives; I would say it is far too much. However, I have decided not to make any changes of this kind. By now the game has reached a certain degree of prevalence and I think for most people (and especially me) it is fine as it is. Anyway, thank you for the suggestion.

In any case, I congratulate you on the excellent score. 280000 points are really not bad!

Thank you and again great job on an amazing game!

I'm glad to hear that.

I just wanted to say that I learned about your game through the Sprite Castle C64 podcast and I have been playing it all night. It looks gorgeous and plays beautifully. You really did a great job with this!

Thank you very much!

What a great game! I ❤ Ms. Pac-Man, and Lady Pac is a big improvement! The bonus rounds and randomly generated mazes have kept me playing for hours. Only gripe: it's a tad slow on PAL systems. Could you perhaps provide an option on the title screen to adjust the game speed the way e.g. Jumpman Jr. does?

Edit: or maybe you could provide two binaries: one for PAL systems and one for NTSC so that the game runs at the same speed? I find the speed of the game under VICE in NTSC mode to be perfect, with PAL it's sluggish, but that's just my 2c (I have a PAL C64 at home and would love to play the game at full speed on real h/w).

There are 8 different speeds in Jumpman Junior. At speed 1 the game updates every frame, at speed 2 it updates every 2 frames, and so on up to speed 8 where the game updates every 8 frames. Very simple. The character, however, moves 4 pixels per frame so it is quite jerky. In my game, instead, Lady Pac moves 1 pixel per frame, so at 60 fps on NTSC and 50 fps on PAL (that's the reason for the different speeds). To make the game run faster on PAL, I would have to move Lady Pac 1.2 pixels per frame. Furthermore, the speed of the ghosts (which is different for each of them and which increases round after round) should also be recalculated accordingly. It is therefore not a question of changing a couple of values in the code, but of reviewing all the calculations of the various speeds, which requires a fair amount of work. I don't think it's worth it. Also because those who play Lady Pac on PAL get used to it and don't realize that it is slightly slower than on NTSC.

> Also because those who play Lady Pac on PAL get used to it and don't realize that it is slightly slower than on NTSC.

Well, I noticed, didn't I? I get you don't feel like making the changes. If I'm motivated enough, maybe I'll disassemble and make the changes myself.  Thanks anyway for a great game. Cheers.

What I meant is that anyone who plays Lady Pac ONLY on a PAL machine (without comparing it to NTSC) would not say that the game is slow. I tested the game on PAL myself during development, and never thought "Oh no! It's too slow".

As I said, it's not just about adding a delay counter like in Jumpman Junior. I should recalibrate the speed of Lady Pac, the speed of each single ghost (considering it increases round after round), and the speed of the fruits (both in normal rounds and bonus rounds). In addition to this, I should also recalculate the time during which the ghosts chase Lady Pac or go around randomly (this also changes round after round), the time during which the ghosts become edible (this also changes round after round), the time before the fruit disappears, the delay counter for the timer in the bonus rounds, the times for animations, and many others. Also consider that speeds and times must be recalculated based on the chosen difficulty level (Easy, Normal, Hard, Expert). It's a lot of work, and I personally don't think it's worth it.

If you find it appropriate to modify the disassembled to have your own version of the game, go ahead.

Anyway, thanks for appreciating what I have done.

I really like the game.  Only suggestion is the pellet sound is just... well.. awkward and almost has me just turning off the sound completely.  Please replace it with something more easier on the ear even the original sound from pac man or ms. pac man is great.  maybe have an attraction demo going that if the title screen is left on for 10 seconds, it just goes to a demo game.   Just have Lady Pac go randomly around and really doesnt need to try and beat the ghosts, and when she dies or if a user hits a key/joy direction or button, it returns to the title screen once again.  Thanks!

An attract mode would require extra effort that would bring nothing more to the game. I don't plan to implement it for the moment, sorry.

I am just preventing the stationary screen at the beginning being left on for extended hours. :)  Maybe not an attract mode, but how about it alternate between the title screen and the high score screen for 15 seconds each?   So for the main, have it say "Press Fire Button to Play" or something along those lines, a person presses fire and gets into the normal title menu options, but lets say the person walks away and its still left on that screen for 30 seconds, just have it go back to the main title screen with the "Press Fire Button to Play" and it goes back to the title screen/high scores list infinitely of course until a player presses fire anytime during the main screen or during the showing of the High Score list.  Maybe have an Asterisk character border * around the High Score screen that alternates colours? :P

Again, just suggestions. :)  Would like to have this game as one of games to be available to play, but don't want the title screen to ghost into the old CRT monitor. ;)

Could it really happen that you leave the game at the title screen for hours at the risk of ghosting the CRT monitor, or were you kidding?

Anyway, to be honest, now I have moved on to do something else and I would not have the time to do what you ask, I'm sorry.

Just would be nice to leave it on for a part of the day to let others try it out. :)  Don't sweat it. :)  Thanks anyways.

Let me understand: do you have some kind of cabinet where you run Lady Pac for several hours and passersby have a chance to play with it?

Thank you very much for adding the highscore saver! 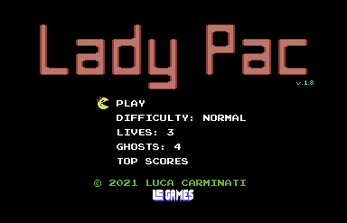 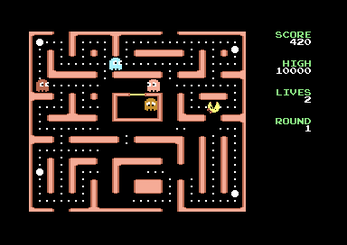 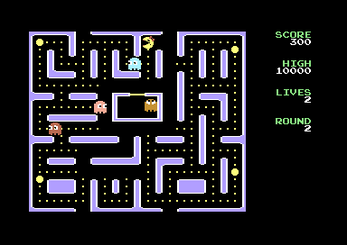 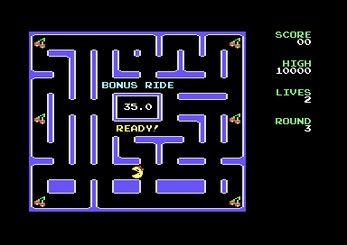 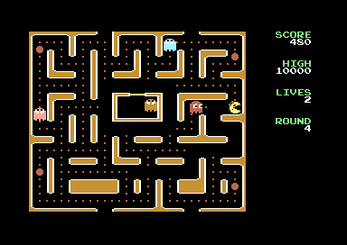 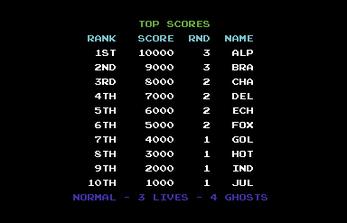