This game for Commodore 64 is the port of Tutankham, an arcade game developed by Konami in 1982.

In this game, the player controls an explorer who is robbing Tutankhamun's tomb. The player will search for precious treasures (maps, lamps, chests of gold & jewels, and, above all, the golden mask of King Tut) and fight off the various creatures that guard the tomb to ultimately find the way through the catacombs.

The player must guide the explorer through a series of progressively more difficult mazes across different stages. The explorer may move in four directions, but can only fire in two directions, left and right, making the player helpless in vertical shafts. There are also "warp zones" located in random parts of each maze that allow the explorer to be teleported from one area of the maze to another. There are several different creatures that constantly materialize from "spawning zones" within the maze and attack, including crows, snakes, bats, dragons, and other magical beings. Those creatures can be destroyed to score between 20 and 60 points with either bullets or a "flash bomb". The explorer has a single "flash bomb" per life that destroys all enemies on the screen. On each stage, the explorer must pick up keys in order to unlock the door to the room where each of the treasures are kept, allowing the passage to the next stage. Along the way, the explorer may grab optional treasures (rings and coffers) for bonus points. If the timer reaches zero, the player's ability to fire is removed. Bonus points are awarded based on the amount of extra time left over when a stage is completed. After the player has recovered the King Tut's treasures in all the stages, the game starts over again with increased difficulty and more keys to pick up.

At 30000 points the player earns an extra life.

While playing, press F7 to pause or F1 to stop the game and go back to the title.

While the top scores are showing, press F1 to reset the ranking.

A fantastic port of the arcade game I loved to hate.  I'm terrible at it, but just find it so difficult not to play.  Only one thing, I found this bug during one of my session (see video at the end of my blog entry)....

So... the game has been heavily tested by three different people and this has never happened. Analyzing the code thoroughly I find nothing wrong. Have you tried my original version or one of the cracked ones?

Got it right from here.  Played it on WinVice 3.1 x86 (in NTSC mode).  It hasn't happened since, though.  It might have been just a fluke.

Emulators are programs and as such they can contain bugs. Just see the long list of "Known bugs" on the VICE website. Also, version 3.1 is now a bit old, as they have reached 3.6.

Quite right.  Most probably a VICE issue, since you've checked and double checked the game code.

Thanks so much! Grazie mille!

Reply
Gentlemen's Pixel Club343 days ago
I enjoyed this one - thank you.  Well worth buying...
Reply
LC-Games341 days ago

Thank you very much! And I liked your video!

You could support the two buttons of the Cheetah Annihilator 😊

I have been concerned to only support the vast majority of joysticks, which of course only have one button.

Consider that the original arcade game didn't have two buttons but a second joystick to shoot either left or right.

Thank you so much for your appreciation of my games!

Good work ! Greetings and thanks.

Thank you for appreciation!

It was always really weird that the C64 didn't have a version of this game when Parker Bros brought it to so many other formats, but it was worth waiting the extra 35 years for this stunning recreation. It's got to be in with a shout as the most accurate C64 arcade port ever.

Thank you very much for the compliments!

You have to be a master then! Have fun!

Thanks for the compliment and for the speed tip on PAL. It seems like a simple and effective solution, although probably not always applicable. In my case, however, I'm not sure I want to give up the smoothness and regularity of the movement, especially when scrolling is involved. However, I will take this into account eventually for future games.

Yeah, before I implemented it I thought it would be noticeable, but it isn't, even when scrolling. It would seem the brain can't tell an object (or the screen) has moved twice as far in a frame, it just perceives the overall average speed.

Looks like you're scrolling a big area in this game though so I guess there might not be enough time to copy all the data.

Oh yes, in Tutankham's case it would not be possible for me to apply your "trick" due to the time used by scrolling.

Also, if a sprite moves exactly 1 pixel each frame (like carts or elevators in Bagman Comes Back), I can perceive a less smooth movement if every 6 frames the sprite moves instead of 2 pixels (I just tried).

In some situations, however, I may decide to apply your idea.

I agree. It's a good arcade port after all , and not the X-th SEUCK or Scene-tier "game" full of fecal language or other sh!t (Roysterini, cough cough). 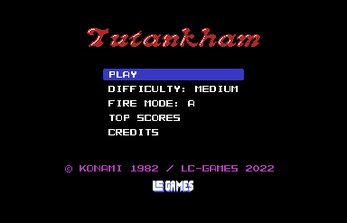 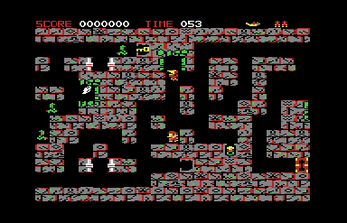 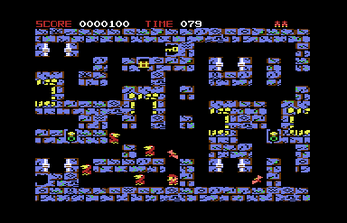 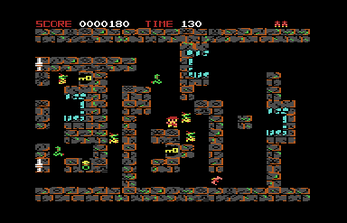 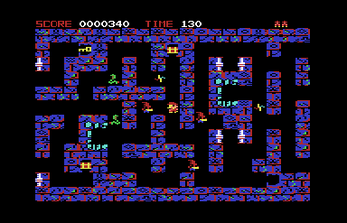 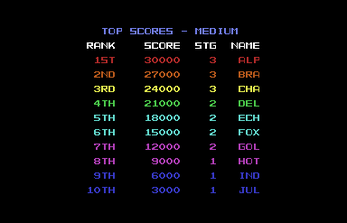